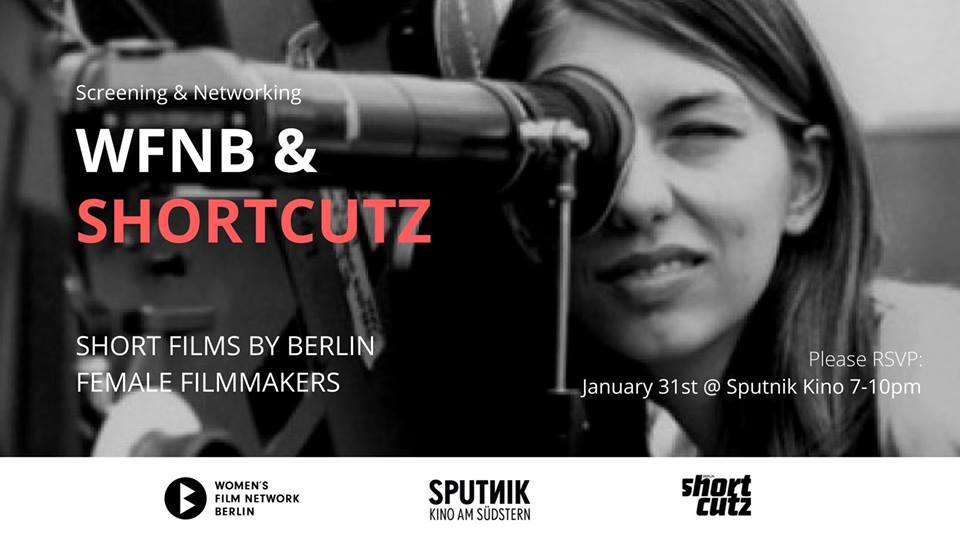 Rain beat down on their hats and hoods as the potential audience wandered in the cryptically-labelled Hinterhofe of Kreuzberg, trying to find the theater. Hinterhof “yellow-diamond” had to be it, as Hinterhof “red-square” had been a total failure full of dentists and unmarked doors. And indeed there it was, the sign: Sputnik Kino, 5th floor. Wait. Five stories up? Yes, five stories up. But there’s probably an elevator, right? No. Waiting at the end of this journey was a rare prize of a collection of short films made by all female filmmakers, presented by the Women’s Film Network Berlin and the short film Meet-up Shortcutz. In the entrance, one gazed up at the task before them. Stairwell after stairwell framed by raw walls and hanging wires, allowing the framework of the building, its defining and limiting structure, to show through. Upon reaching the first of five sets of stairs in the elevator-less building one was greeted with an uplifting sign “No pain, no film” shortly followed on the next stair case by “This is so Berlin…” (written in English, which is itself quite Berlin). Perhaps the trial by stairs was meant as a minuscule taste of the struggle and pain of women in the film industry? The fight to reach the top only to receive a condescending pat on the head, rejection, or platitude? More than likely it was due to this city’s obsession with stairs and the unspoken hatred of technological conveniences. Whatever the reason, the struggle is always worth the reward when it comes to promoting the representation of the underrepresented in the media landscape. 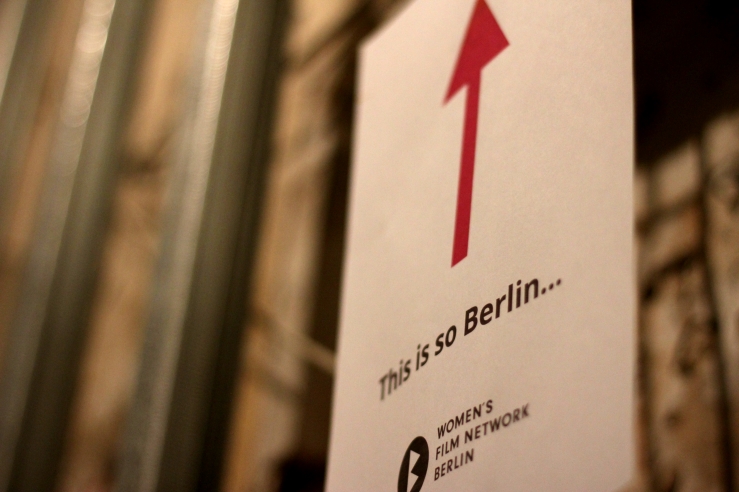 Women’s voices, and indeed those of many other identities, are conspicuously inconspicuous in the production of film and television. Most can recall a woman as an actress or in a role, but it is a much greater challenge to recount the work of a renowned female director, producer, or writer. These are the positions from which what is to be produced, which stories are to be told, and how they should be conveyed are decided. The difficulty recalling a favorite female producer or director is most likely related to the fact that there just are not that many. From all of these influential roles, women make up no more than twenty-seven percent of the field, and are even more limited as executive producers, directors and writers.[1] One must assume that the numbers for LGBTQ and ethnic communities do not fare much better. What culture at large loses from this exclusion is the ability to engage with a too-often ignored part of itself, that is, the many groups and identities that are excised from the sanitized and simplified concepts of “everyday” culture, but none-the-less constitute a part of who we are as individuals and society. What women are denied in this is their voice and the expression of their individual world view. No two people see things exactly the same way, but all have been influenced by their surroundings. The external too often determines the internal in that how one looks changes the way one is greeted, treated, raised, employed, included, excluded, and even the way one speaks or is allowed to speak. It is a diversified and distributed network of power and norm-production that builds the frame within which our freedom and individuality exist.[2] Is it not fair then, that if we are building our social world through a constant interaction between people and media, a writing and rewriting of the rules of engagement, that all those affected should be seen, heard, and a part of the conversation?

It is this void of the voiceless that is expanded through the exclusion of alternative perspectives from cinema and media and against which the Women’s Film Network Berlin positions itself. The WFNB “hosts meet-ups and events aimed to provide a space to inspire, empower, inform and collaborate.” And far from inciting the revolution “At the end of the day, most of us just want to make something.”[3] A space is thus provided for women filmmakers to collaborate and refine their work, and tools are shared to bring these perspectives to a wider audience. Inside the exposed skeleton and hanging wires, the not-so-hidden infrastructure defining the building in Hinterhof “yellow diamond,” is framed a theater with its cinematic signifiers of decorative cameras and projectors, red carpet-colored walls, luscious plants and burning candles enhancing the atmosphere of the exotic, and the spectacle of movie star posters, all reinforcing the hallowed function of the theater space in cultural production, and also a nice bar with some cheap beers. The Sputnik Kino, like all theaters, is a place where identities and ideas are produced and reproduced on the screen daily, and on this rainy Wednesday evening, newly refined voices were about to leave their mark. The evening organized by the WFNB consisted of four short films written and directed by female or female-identifying filmmakers: The Glasshouse by Gianna Arni, Win Win by Nina Walter, Löwe am Montag (Lion on Monday) by Leni Wesselman, and Out of Frame by Sophie Linnenbaum. All of the films showcased great production value, witty and clever writing, and clear sense of vision. The themes were familiar: loneliness, failed ambitions, complicated relationships, and regret. But one is then tempted to ask, what is then so female about these films? That, however, is just it, that is the exact wrong question to ask. 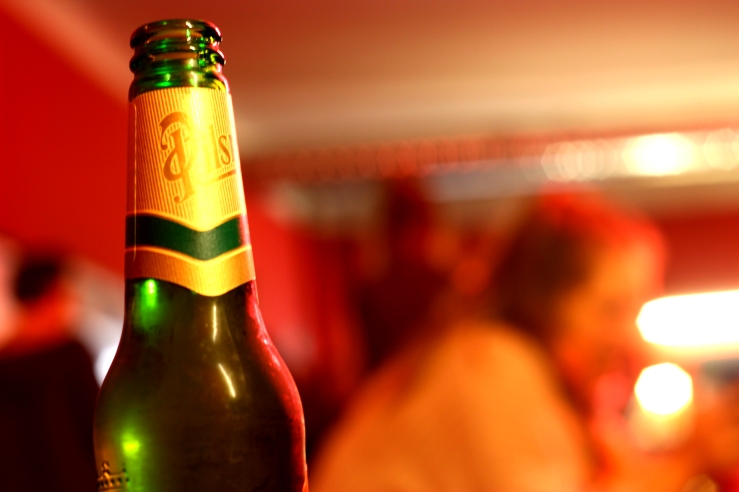 Contrary to popular ideas of “men are from Mars, women are from Venus,” the concept of two distinct, essentialized camps reduced down to their supposed core sexuality, all individuals have been shaped by similar social forces, ideas of right and wrong, who the cool kids are, and how many stairs one should have to walk up to reach a theater before someone installs an elevator. Since the information we receive is filtered through a gendered lens, the internalization of this influence has individual effects; different perspectives on the same processes. These new takes on old themes come through in the works of the Berlin Female Filmmakers short film collection. The Glasshouse delves into failed fatherhood and reveals both a critique and expectation of masculinity through the lens of director Gianna Arni. Sophie Linnenbaum in Out of Frame explores not just the feminist observations that women are always seen and judged through the male gaze, but also the isolation of being the observer, the never seen, the camera itself.[4] Indeed, some of the films resonate with and reproduce Hollywood tropes as Löwe am Montag maintains the essentializing form of the eccentric girlfriend and the boyfriend that just can never understand. Win Win addresses the aspirations of women to achieve the beauty ideal, to become a model, and uncritically replicates this narrative. Cliché, one could say, but so is Hollywood, because the cliché is what exists in everyone. It is not necessary that these films and other works of women creatives tear down the system or address brand-new, specifically feminine things. Indeed, the limitation of female filmmakers to only talk about female things is already the reality, as so-called chick-flicks exemplify. It is rather of significance that these filmmakers observed themes and feeling that affect them and thus touch on narratives that affect everyone, and through sharing their vision, they help clarify, and more importantly, take part in defining this ephemeral object we call culture.

Women in film does not necessarily mean feminism in film, even if equal representation and empowerment of genders are feminist ideals. Indeed, to limit women to only feminist ideologies and stories, and to criticize them only on this level, serves to further sideline and isolate the work of female creatives from the larger media milieu. The films on this evening all had a tendency to reproduce rather than resist the patriarchal narrative. All four films had male main protagonists (although sometimes in relation to a female character), where there was narration, it was male, and the agency to move and act was also firmly in male hands (although with some interesting exceptions). Mothers were still care-givers, women characters prioritized beauty, and eccentricity was still a female trait. Indeed, men and women existed as categories without question. One must remember that inside the conception of liberation is the freedom to choose to accept the status quo, to identify with whatever one wishes, and alternatively, to not be aware of the social narrative one has internalized. All of these films have earned the right to be analyzed and understood on the terms of any other film, that is, with regard not only to the feminist content, but the larger social implications and contributions to filmmaking itself, an attempt at which will follow later. The first step to a more equal culture is being able to tell the story from all sides and be part of the larger conversation; To have a platform from which to confront and construct what it means to be a woman, and to share this process with a larger audience. This in itself is a step toward equality and liberation. To this end, women filmmakers need a fair representation in choosing what and how stories are told, in order that culture can reflect on all sides of itself and not just a myopic few. The project of the WFNB takes a great first step in amplifying the voices of the underrepresented from the small screen to the big screen, and eventually letting them reverberate through the halls, down the stairs, and in the exposed structure itself (where, coincidentally, one could very easily build an elevator).

View all posts by Threadbaer